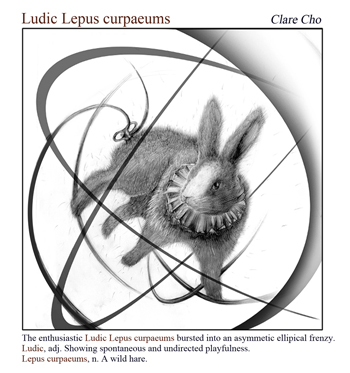 Over a three and a half year period I culled lists of descriptive words previously unknown or unused by me, doing it one letter section at a time. I used a 2,000-page Merriam Webster’s Dictionary that my Dad brought home when I was four, the Oxford English Dictionary that I bought for my Dad when I was 30, and the Chambers Concise Dictionary, my favorite, a dictionary published in Scotland. I read and reread the lists as I made them. The process created the alliterations that seemed to magically turn themselves into images.

I presented my work to the student body in the high school auditorium, showing my “Turtle Series” paintings, Daedal Doodle and highlights from my 25-year career as an illustrator. Serendipitously, 26 kids elected to take my class. With certitude, I knew I wanted these students to make their own version of my ABC book. 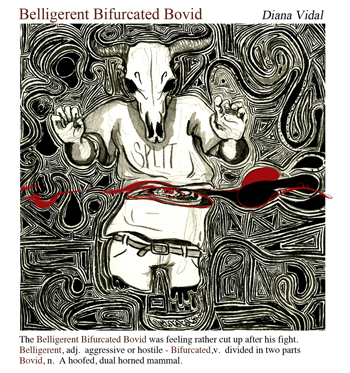 The lesson plan mimicked the process I went through to create Daedal Doodle and assigned each student a letter of the alphabet. They had to make lists with brief definitions of “new words”, unfamiliar nouns and adjectives, and sometimes even the occasional verb. I told them to look for words that had a “bounce”, words that sounded cool, words that provoked imagery.

Though the words may appear to be random, it is my belief that they were personal in nature, selected because there was some connection with the reader’s life experiences. Since the project started in an art course, my job was to demonstrate a process that could easily be understood, that would encourage students to come up with something completely new to them, that they could call “Art”. The kids were open to what looked more like fun than work.

Sitting in a room full of students simultaneously reading the dictionary became the beginning of my “Aha!” moment. 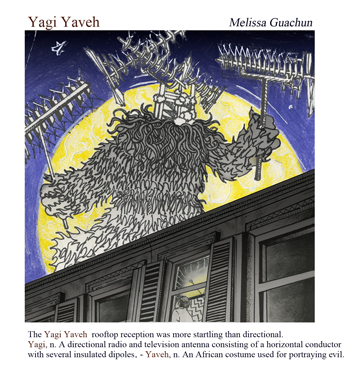 The success of this “accidental” curriculum reminds me of the “accidental” invention of Teflon. It seems there was some odorless substance at the bottom of the beaker that could not be washed, burnt, or chemically dissolved away; a strange byproduct of the previous experiment. After examination by Roy J. Plunkett, a young chemist, Teflon went on to become a gigantic industry for decades. Plunkett often told student audiences that his mind was prepared by education and training to “recognize novelty.”

The novelty of reading the dictionary to source words for drawing can be an important process in bridging art and language, ostensibly ending the traditional, but rigid, separation of the arts from basic education and thereby creating a fluid and creative mind.

Each student proudly came up with nothing short of some dizzying alliterative, pictorial word invention. The required tools are a dictionary, a pencil and a pad. The byproduct: a world of knowledge and the imagination. The Daedal Doodle Dictionary Curriculum generates conceptual thinking while exercising drawing.

People often ask me where I received my art training. Although I attended The Los Angeles Art Center College of Design and The School of Visual Arts, I answer, “I got my start at New York City’s High school of Art & Design”. After showing my work to Art & Design’s senior class, I was invited to exhibit my work in their main gallery and give the keynote speech to the graduating class. 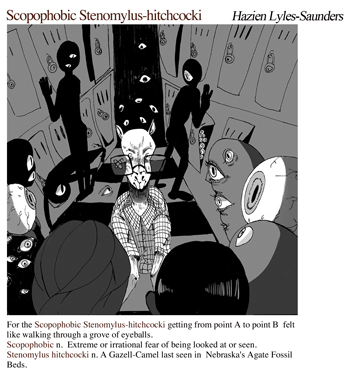 At the graduation ceremony, I noted that A&D alumnus, Art Spiegelman, the creator of the graphic novel Maus, established an award for the best cartooning graduate titled, “The Maus Award”. This inspired me to create an award for best Creative Drawing, “The Daedal Doodle Award”. The school asked me to base the award on a contest and pick the winner.

Again, I had the kids make an ABC book using the Daedal Doodle Process. This time, I directed them to use the Museum of Natural History’s extinct species section for their initial reference and complete the alliteration by using a dictionary. This class was fortunate to have the painter, James Harrington, instructing. The students all came up with terrific alliterations, and the students with the best drawing and ideas won. The work was so consistently eye popping I decided to split the award four ways–which was still hard to do considering the high quality of the classes’ work.